We regret that technical difficulties prevented the recording of this broadcast. Here is a summary of the interview:

Thank you for listening to ARTFM. Welcome to PUBLIC, a radio show produced by the Louisville Visual Art Association in which visual art inspires one artist’s musical choices. I’m Keith Waits and today my guest is Tracey Pennington, an accomplished mosaic artist and recently announced recipient of the 2014 Hadley Prize for Visual Art.

The Mary Alice Hadley Prize for Visual Arts, established in 2013, is awarded by the Community Foundation of Louisville and the Louisville Visual Art Association. It includes a $5000 award for development. This year there were some 65 applicants and you were chosen from this group by a panel of 5 jurors. What do you believe they saw in your application that made you a contender?

The piece we chose to post on the PUBLIC blog and Facebook page is “Breaking Point”, and it is an image of faces in profile, some of which appear to be talking, which seemed appropriately paired with an interview. 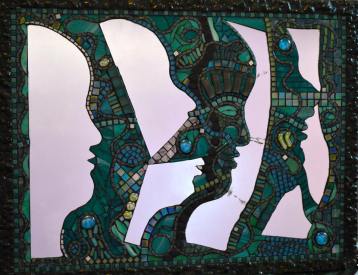 Tracey Pennington had ambitions to be an artist earlier in her life, with a particular interest in cartooning, but changed her focus to pursue a journalism degree and worked in the corporate world for an extended period. Twenty years later, after a life-long struggle with depression, she experienced, …”not a crisis exactly, but something snapped.” Increased intensive therapy led to the suggestion that she attempt to reconnect to her creative self by “…choosing something I had never tried before.” On a trip to Hobby Lobby, she walked the aisles, avoiding the more conventional mediums of drawing and painting, searching for the offbeat, before she happened upon a beginner’s mosaic kit.

As a technique, mosaic can seem tedious, but for Pennington, it is a thoughtful, nearly meditative process that she embraced with increasing passion and dedication. “It was, from the start, a very healing experience to explore this technique.”

She spoke in some detail about materials, most of which she purchases from China, but the heart of the mosaic heritage is in Ravenna, Italy. Pennington plans to use the Hadley Prize money to travel there in October to study at The Mosaic School, exploring ancient techniques with the world’s foremost masters of the process. She had applied to the school before completing the Hadley application, uncertain of whether she would be invited to Ravenna, and if so, whether it would be affordable. The Mosaic School DID accept her, and she DID win the Hadley Prize, making all things possible.

Songs played during the broadcast:

Straight to the Point – Carrie Newcomer

Must Be Love – Stacey Earle

Erwin Redl is an Austrian-born artist now living in the United States. He is known for his large-form light installations. In his artist statement, he writes:

“My work reflects upon the condition of art making after the ‘digital experience.’ The formal and structural approach to various media I employ, such as installation, drawings, CD-ROM, Internet and sound, engages in binary logic, because I assemble the material according to a narrow set of self-imposed rules which often incorporate complex algorithms, controlled randomness and other methods inspired by computer code.”

This playlist was centered around Erwin Redl’s work and philosophy.

Adam Seers can be described as a nomad in a variety of ways. Throughout his childhood he lived in multiple states and cities, and now currently resides in Louisville where he is studying Music Technology with an Art minor at Bellarmine University. When Seers isn’t composing songs for his band, Ed Monk (who just recorded their first EP), he is playing electronic music under his solo moniker BEEN SAVAGE.

According to Seers, his multifaceted artistry tends to blend together. He approaches his artwork in a similar manner as his music – organizing ideas into linear structures and form. In his piece “Identity” (shown below), abstract blocks of various patterns morph to an eventual state of conclusion. 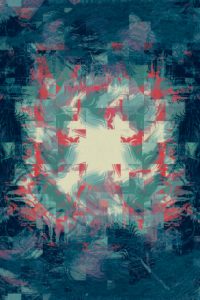 On today’s show, we listen to a playlist Adam put together, and discuss how the music he selected influences both his music and artwork. We also talk about the future of his new band, Ed Monk.